A new report from the Intercept.com reveals how Colorado’s fight to institute a single-payer healthcare plan is being fought with the help of a “Democratic consulting firm.”

The official group fighting the single-payer healthcare plan is “Coloradans for Coloradans”. Sounds like Steven Colbert made up that name, doesn’t it? 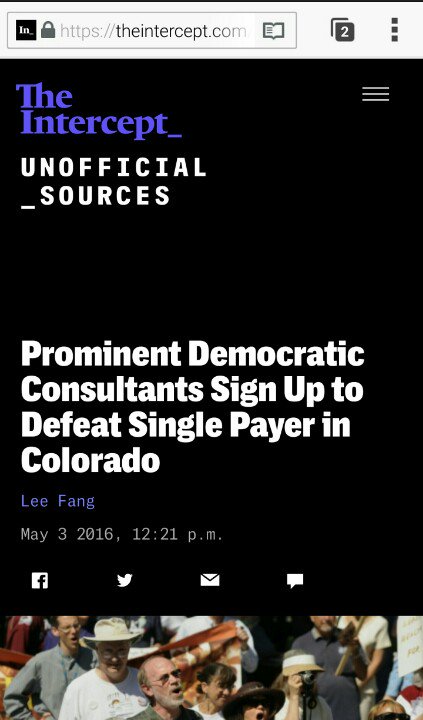 According to the Intercept.com, “Coloradans for Coloradans” paid Global Strategy Group tens of thousands of dollars for “consultant and professional services”. But that’s not all.

Another group linked to “former campaign staffers” of President Obama was also paid tens of thousands of dollars by “Coloradans for Coloradans” for “consulting services”. That group, Hilltop Public Solutions, also had ties to a different super PAC supporting Clinton that was later “folded into the Clinton campaign”. Huh?

Why the fck are any Dem-linked organizations fighting in any way for ANY group trying to kill single-payer healthcare? I’ll let you put 2 and 2 together.

Maybe someone who hasn’t forgotten what journalist integrity means should ask Hillary Clinton about this issue at her next campaign stop. But then again, she might respond: “well then why don’t you go run for something then!”. #WeDontForget