Don’t come at me with bullsh!t arguments. For example, one such argument is that since Barack Obama was an outsider who won, Bernie Sanders’ supporters shouldn’t be complaining because Sanders, as an outsider, couldn’t get through the Democratic primary.  Both were outsiders and one got through while the other didn’t. right? Wrong.

In the words of Remy Ma, are you dumb? Obama was never an outsider. Citigroup picked most of his cabinet, a fact we found out through the Podesta emails. But just use your common fcking sense.

True outsiders don’t win the Presidency under the current rules of superdelegates and fundraising agreements.

As I’m writing this blog post, the breaking news is that in 2015, the Clinton’s basically purchased the DNC before the primary according to b0mbshell revelations from former DNC head, Donna Brazile.

Yes, I have problems with Brazile. But she’s one of “theirs”.   Brazile has nothing to gain — other than being accused of having Russian sympathies — by revealing this now.  She’s not a “bernie bro” or a “russ!an spy”.  Brazile and the Clintons used to be as thick as thieves.

As for Obama, MARKETING made us all think he was an outsider. We had no way of knowing he was just as much in the fcking tank as everybody else. So on those random days when I remember standing in long lines TWICE to vote for his a$s, I’ll keep telling myself ‘Never Again’.

But the clever ads and the central-casting-smile made us all blind to his heavy ties to the establishment. And don’t even get me fcking started on all the sh!t he DIDN’T do for the millions of us waiting on that hookup.

So, Obama duped us and then the hillbots got duped again by the loser who lost to him in 2008.

Bernie Sanders never had a chance at actually getting the nomination under those circumstances, even if he won 23 states. 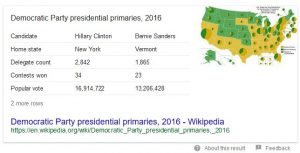