It’s imperative to question who is put before the public — in television, film corporate America, etc — to represent Black American descendants of slave. Those images are beamed all over the world as specific representations of blackness. Since these people have been position to represent my people, I need to know who they are and how they got there. 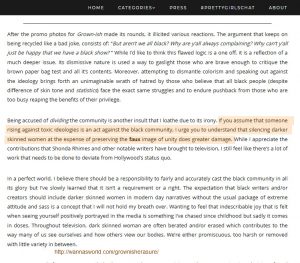 On facebook, I ran across an article critiquing the lack of darker-skinned women on the new show Grown-ish. The lead actress is Yara Shahidi. I don’t know what role Shahidi has in casting, if any. But this brought up a separate issue around Shahidi that is concerning me.

A family member of mine once proclaimed Shahidi as an inspiration, and thus a goal, for little black girls everywhere.  But who is this young lady? What is her lineage and her history, and why are so many black women (many of whom are descendants of slaves) so proud to specifically hold her up as a vision-board-based goal for their daughters? And, why do many present her, specifically, as an example of “black girl magic”?

Wait a minute, fam.  Hold your damn horses.  I am not questioning the talent, beauty, or accomplishments of Yara Shahidi, so get out of your feelings.  Please leave your ‘stan’ craziness at the door before continuing to read further or kindly exit this blog. 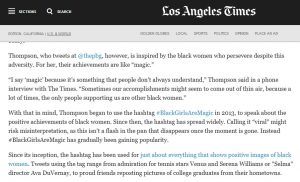 With very little effort, I found out Shahidi has an extremely stable and well-built foundation making the term “black girl magic” an ill-fitting phrase when one learns why the term originated. The expression “black girl magic” was created by CaShawn Thompson in 2013 who give the following explanation about why the phrase was born:

“I say ‘magic’ because it’s something that people don’t always understand… Sometimes our accomplishments might seem to come out of thin air, because a lot of times, the only people supporting us are other black women.”
– CaShawn Thompson

Read that again. Thompson is quoted as saying “…because a lot of times, the only people supporting us are other black women.” Well, objectively speaking, that isn’t Yara Shahidi’s experience.

When you read ‘you’/’your’ in the following paragraphs, it’s not in reference to any one person in particular.  I simply need you to juxtapose Shahidi’s history to that of your little precious black girl whom some of you are hoping will walk the same path to accomplishment as Shahidi.

Yes, Yara Shahidi was a child star. But she is also a girl who studied at Oxford University as a teenager.

Do you have the money to send your little Jemisha (I just picked a name) to a prestigious university in another country? Does she even know what Oxford is? What early childhood programs is she enrolled in to give her the academic background necessary to handle Oxford?

And that’s just the tuition for the school! This doesn’t include the amount of money necessary for your little one to move to or live in another country.

The dollar is weak in comparison to the British Pound. Can you handle the total price to build that experience into Jemisha’s life?  How have you positioned little Jemisha to swim in those social and financial waters?  Forget about Oxford, are you even on track to afford the price of sending her to an out-of-state college in America??

(By the way, just to show you how committed the UK is to it’s people, their students don’t need to pay any fees upfront and can access loans directly from the UK government.) 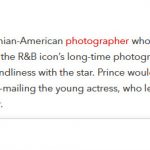 Shahidi’s father is a very famous Iranian-born photographer. He was Prince’s photographer. Is little Jemisha’s father loaded? Does Jemisha have a father who could theoretically take her from coast to coast without blinking an eye or raising money to fund the trip? Prince, by the way, is said to have kept in contact with young Shahidi to encourage her. How many famous superstars does your little Jemisha know who can encourage her in that way? But let’s continue. 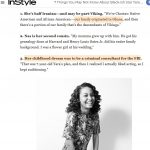 In addition, according to TheMarshallProject.org, only 4.5% of FBI Special Agents are black (as of 2014). Think about how well-prepared for life little Yara Shahidi had to be in order to put ‘criminal consultant for the FBI’ on her list of goals to accomplish?!

Anthony Anderson talked about Yara Shahidi being on track to become a Rhodes Scholar. Do you honestly think she only “worked hard” to find that path? Think about how many things had to go right in her life for that to even be a possibility.

By the way, the first black Rhodes scholar was Alain Locke, who himself was the child of a “well-to-do family with significant pedigree”. 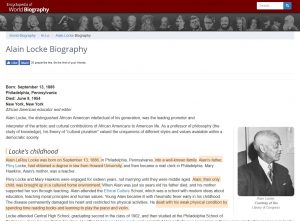 Locke, born in 1886, graduated from Harvard in 1907. His father graduated from Howard University. You read it right. Imagine you were born in 1886 and even your father was a college graduate! These people ain’t you. They’ve never been you. But I digress.

If that weren’t enough, Shahidi’s related to Nas. #ICANT. This girl has connections all up and through the place regardless of whether or not she’s ever had to use them.

Be proud of this individual young lady and stan for her and her achievements.  But don’t confuse her with your hopes for who you want your daughter/niece/younger sister to be if their backgrounds are wholly dissimilar to Shahidi’s.

I’m not shocked when excellence is erected atop a solid, stable foundation.  I expect someone with her background to be a high achiever, or to at least have multiple opportunities to grow into a highly functioning adult.

There’s nothing ethereal, spectacular or “black girl magic” about Yara Shahidi’s accomplishments. Rather, they are the result of a strong financial foundation and human network of support which has protected her from birth. That lineage created and sustained her passion, curiosity and achievement. No amount of wishing/hoping/thinking/praying will create this type of stability.

If you’re a descendant of slaves in America — with a mountain of systemic issues like generational poverty, medical discrimination, predatory lending, redlining, access to free but wholly inadequate schools, etc — Yara Shahidi ain’t you. She ain’t never been you. She ain’t gon never be you. And that’s ok. There is value in your history. It’s how this nation was built and strengthened.

With that said, unless you have the history to, or can afford to, lay a similar foundation as Shahidi’s for your beautiful black baby, you better let her know what’s real and teach her who she is. Teach her not to be discouraged if she can’t get to where Shahidi is simply by “working hard” or wishing it into existence. (Been there. Done that. Couldn’t afford to buy the t-shirt.) Statistically, she’s starting out with a mountain of disadvantages and she needs to know that before she goes crazy trying to become a fantasy.

Teach her that her experiences while walking her path will be totally different from Yara Shahidi’s. And don’t make her feel like sh!t if she doesn’t succeed after you didn’t or couldn’t afford to give her the financial stability necessary to be as extremely well-situated in life as Yara Shahidi is now.