A number of recent polls now show Hillary Clinton and Donald Trump in a statistical tie.  But Clinton fans and her allies in the media are desperately trying to convince the public to dismiss the very measurement by which they so effectively promoted her candidacy in the past.  Some of the same polls show Bernie Sanders trouncing Trump by double digits which apparently makes it mandatory to ignore these new numbers.

Up to this point, Clinton’s media “stans” chose to insult Sanders’ voters for sticking by a principled stance of opposition to establishment bullsh!t.  So now it’s time for Clinton’s media allies to get real with themselves instead of whining about Sanders’ voters.  The only reality they need to worry about is people staying the fck home because they can’t stand Clinton or Trump.

Clinton’s corporate-media-employed unofficial surrogates are too content with comparing this primary to the primaries of old.  That’s why they keep getting shaken by foundation shattering events like a Trump nominee (Ugh!) and why they keep ignoring worrisome polls.

By rejecting the new poll data, Clinton apologists deny the former Secretary of State may have to fight a close race between herself and a man who has never held elected office.

Instead of taking the polls as a warning sign, Clinton supporters and her media allies are content with brushing off the numbers and blaming her poor showing on her Democratic opponent.

Clinton “stans” already have an immature understanding of the foundation on which Sanders’ support is built.  Because of that, they are pushing the narrative that if Sanders drops out her poll numbers will rise.  In addition to pushing half-baked narratives, these corporate cheerleaders routinely use patronizing language when addressing the very voters Clinton may need in November if she wins the nomination. 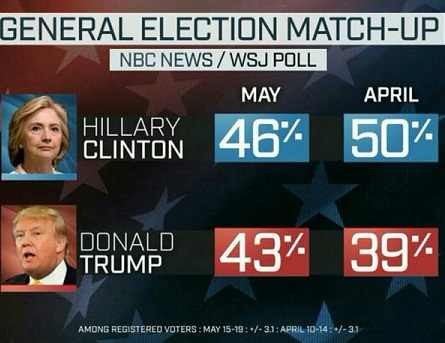 Pro-Clinton pundits assume ‘Daddy Sanders’ will be able to hand over his voters to Clinton’s camp without her making a serious effort to earn their votes; that they’ll have no choice but to vote for her or risk a Trump presidency.  Whether it’s seen as bitterness or not, the political reality is that half-hearted outreach and temporary lip-service may not work at this point.

Hillary Clinton’s problem with courting these voters is not Sanders’ fault.  Nor is he to blame for her statistical tie with Trump.  Clinton has a lot of baggage but many of her “stans” are hiding behind her resume to shut down opposition to her candidacy.

Why is it when Clinton’s tied with Trump in the polls and is having trouble wooing Sanders’ voters, the media treats her like a poor victim?  A victim who has to unfairly run against two opponents at once?  Clinton is asking for the highest position in the world and has an awesome resume, so she should be able to handle this, right?  Right?? But when she struggles in the polls, it’s the fault of that darn Bernie Sanders who won’t drop out of the race and hand over his supporters! #ICant

Further examination of current polling suggests a massively high unfavorable rating for both Clinton and Trump along with Trump being trusted more to handle issues important to the American public.

What the corporate media refuses to admit when discussing the new poll numbers is these polls were taking after their declaration of Clinton as the winner; after countless panel discussions where pundits openly questioned why Sanders is still in the race; after proclamations from some of the (formerly) most trusted liberals in the business who decreed the race “over” weeks ago.

So why the fck is Clinton’s pitiful showing the fault of a candidate the media dismissed weeks ago?  It’s not.

It seems Clinton “stans” and her media allies want to feel better by blaming Sanders for her failures.  However, it’s not the Vermont Senator’s fault more people trust Trump on the issues of “Changing business as usual”, “Protecting American’s trade interests”, “Dealing with Wallstreet”, “Dealing with the economy”, and “Standing up for America”.  These are VERY specific poll questions where people were asked to choose between Trump and Clinton.

Apparently a significant subset of Sanders supporters — who have always been Democrats — are disgusted, surprised, disillusioned and/or disappointed by the way the Democratic establishment treats Sanders and his supporters.

These people will never vote for Trump.  Never.  But they won’t enthusiastically support Clinton.  An even smaller number won’t support Clinton at all.  This is separate from another subgroup of Independents and moderate Republicans whose support for the Democratic party begins and ends with Bernie Sanders.

Some Democrats have excused the most ridiculous things (Wallstreet speeches, etc) — things they would never allow a Republican rival to get away with — because it makes their preferred candidate look bad.

The hypocrisy became obvious to the public when some Clinton fans made arguments against Independent voters being allowed to vote in Democratic primaries.  The “Big Tent” Democrats suddenly were willing to keep more people from voting if it would most likely result in a Clinton victory.

This Democratic primary is worse than 2008.  In 2008,  Clinton and Barack Obama were arguing with each other.  They weren’t arguing over the foundation of the very system in which they had to run.  Both Clinton and Obama were taking millions of dollars from Wallstreet, so they were both compromised in that way.

Sanders and Clinton are having a fundamental disagreement with the very infrastructure of the establishment.  Some establishment Dems — trying to usher in a Clinton presidency — are set on protecting their power and influence by being condescending as fck towards those who question the system.

Listen to the podcast for much MORE!

To make a long story short, this is Clinton’s bed.  And unless something miraculous or unforeseen happens, she will have to lie in it… without blaming Bernie Sanders for having to do it.

1:54 Media polling people who’ve already heard them (media) say the Dem race is over
2:41 It makes Clinton apologists feel better to blame Bernie Sanders
3:29 Too busy blaming someone else for Clinton’s serious shortcomings
5:10 Blame your goddamn self
5:58 Ignoring Clinton’s poll numbers, but calling Sanders supporters delusional? #gtfoh
8:42 Kneel before Zod! (ie Hillary)
9:23 It is Clinton’s job to talk people into trusting her
11:16 Disillusioned and disappointed Dems
12:51 Dems blind to hypocrisy.  Eyes = Opened
15:58 Dems arguing that Independents don’t matter
17:48 This Dem primary is worse than 2008
20:23 Liberal Media: I used to love ’em.  Now, not so much.
23:02 Grown-a$s people do what they want. They don’t march like sheep
23:15 Media has a childish,immature view of who Sanders’ supporters are
24:45 Nevada, Nevada, Nevada
27:12 Nobody asked you to kiss Sanders’ ass; just to correctly report what happened
29:50 Hateful response to ppl who have issues with Dem party
32:50 Republicans will look the other way to support Trump
33:52 Trump is perfect opponent for Sanders
35:42 You passed her up once. Why go back now?