Bill Clinton has been allowed to get away with saying many things during his wife’s Presidential campaign. Today (Apr 21) he added one more thing to the list: attacking the demographic that is strongest in their support for Bernie Sanders.

According to the Huffington Post, Bill Clinton told people at a Harrisburg, Pennsylvania rally that the “young people who are disillusioned now” should have voted in 2010 (midterm election), and because they didn’t, Democrats lost Congress. 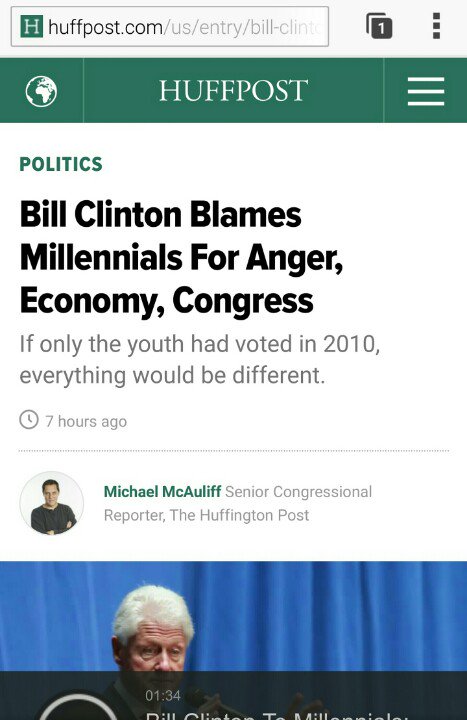 The reason that there’s so much anxiety, intensity, anger, blame in this election is that 80 percent of the American people have not gotten a pay raise since the crash eight years ago, after inflation,” Clinton said.

“We got our jobs back in seven and a half years,” Clinton said, before coming back around to name the slackers in the economic equation.

“If all the young people who claim to be disillusioned now had voted in 2010, we wouldn’t have lost the Congress, and we’d probably have our incomes back,” he said.

A large subset of “young people who are disillusioned now” who are backing Sanders were not old enough to vote in 2010. A 22 year old Sanders supporter today was only 16 in 2010. Thus, lumping all young Sanders supporters into the same category is asinine.

In addition, the Democratic party was a fcking mess in 2010. They fell all over themselves running away from President Obama and his policies on top of trying to out-Republican their Republican rivals. It didn’t give the Democratic base any reason to get out and vote for them, as I’ve already written about years ago.

But Clinton goes further by saying if these “disillusioned” young people voted in 2010, “we’d probably have our incomes back.” Let that sink in for a minute.

Bill Clinton accused young people — most of whom support Sanders and some of whom weren’t old enough to vote in 2010 — for being the reason why Americans’ paychecks are still low after the 2008 Bush Administration economic crash.

Bruh. The more he talks, the more suspicious I get that Bill Clinton low-key doesn’t want another President in the family.