In their endorsement, the Philly Tribune says Sanders “offers an inspiring message and a bold vision for America,” and that his policies are in the best interest of “African-Americans, specifically” 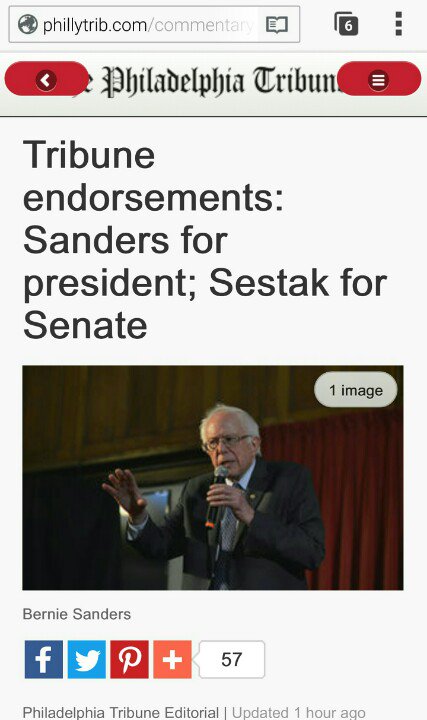 Sanders also doesn’t have the baggage that his rival Hillary Clinton has, the Philly Tribune correctly points out.

The Tribune points out Sanders’ anti-segregation protesting while still a student at the University of Chicago, and praises his support for free tuition at public colleges and universities.

Aside from endorsing Sanders, the paper also points out that Hillary Clinton has “exercised bad judgment on critical issues” including her decision to give “highly paid speeches to Wall Street.”

The Philly Tribune was merciless about Clinton’s record, saying:

In foreign affairs, she supported the invasion of Iraq and has publicly advocated a far more aggressive approach toward Syria than President Barack Obama. Obama and Sanders opposed the war in Iraq. Sanders is also a strong advocate of Palestinian statehood, which requires considerable courage. The New York Times describes Clinton as more hawkish on military matters than Obama and most Democrats in Congress.

Clinton’s so-called strongest point is her “experience” in foreign policy. However, Clinton’s judgment came under scrutiny as time revealed the terrible consequences of the Iraq war, questions about her stance on the coup in Honduras, and most recently her stances and decisions concerning Libya.