Don’t ask me to defend Bernie Sanders from the “psychic” predictions of media pundits who are little more than pseudo-psychics. I have long since grown tired of the mystical machinations of the corporate media — who didn’t see Sanders being successful in the first place — now decreeing to the public what he will or won’t be able to accomplish in the weeks going forward. 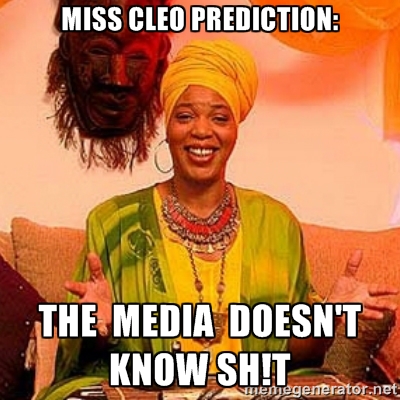 Let me take a little detour for a minute. The day after Sanders beat all expectations and clobbered Hillary Clinton in the Wisconsin primary by 13 points, I should have been expecting the establishment media to lay bare their entire a$s for the world to see; acting a goddamn fool and calling it ‘news’.

All of a sudden it became imperative for the media to have shallow discussions about what Sanders supposedly said to The New York Daily News instead of their usual panel discussions about the election results. They would have had to talk about how Sanders won big in a big, blue-collar state, so I suppose what they generally ended up doing was better for them.

The way some of these pundits interpreted Sanders’ remarks made me question whether they had actually read his words or whether they were commenting on the Daily News’ misguided (at best) interpretation of Sanders’ comments.

I’ll direct you to Nomiki Konst’s takedown and the New York Times’ breakdown of that pitiful hit piece by the Daily News and get back to the main topic.

Outside of the inane, hair-on-fire comments about Sanders vs Daily News, the public got to hear pundits reiterate how allegedly “improbable” a Sanders win will be. Some tried to put math behind completely unless, time-wasting conjecture on how the vote will come in for states which haven’t even voted yet.

Some of these people seemed like they would be more comfortable sitting in front of a crystal ball imploring us to give more money in order to continue the reading.

Bob Beckel appearing on CNN Tonight with Don Lemon (April 6 2016) simplified the general feeling of the media on the subject of Sanders’ campaign. He said to Ben Jealous (Sanders supporter):

“Ben, I’ve been counting delegates for 6 elections. Ain’t no way you’re gonna get to a majority of delegates — by pledge delegates.”

Really, Beckel? Can we get the lottery numbers for the Mega Millions too? Here’s an idea: Why don’t we wait until people have actually fucking voted to see how the delegates shake out? I know! Crazy idea, right?

Beckel and the other know-nothing “psychics” don’t really know sh!t when it comes to what will happen in the future of this primary. They didn’t see Sanders being successful at all. This was supposed to be over after the first Super Tuesday, remember?

They didn’t see him surviving without having to take millions of dollars from big donors. Sanders is proving the “impossible” right now by running a successful, contentious campaign without having to kiss the ring of big campaign contributors, or play nice with Wallstreet banks, Big Oil, Big Pharma, or the insurance industry.

They didn’t see him pulling off a string of wins these past few weeks. Sanders won Idaho (78%), Utah (79%), Hawaii (70%), Washington State (73%) and Alaska (82%) with 70% or more of the vote in each state, annihilating Clinton and keeping her delegate count in the single digits for each state.

They didn’t see him trouncing Clinton in a big state like Wisconsin either. Just weeks ago they were telling the public how Clinton would stop Sanders’ rise once the primaries swung back to the big blue states in the east starting with Wisconsin. But days before the Wisconsin primary, when the polls showed Sanders leading by 5 pts, the talking heads said Wisconsin was “wired” for a Sanders victory. Huh??

Ultimately, Sanders won Wisconsin by 13 points. But I dare you to find footage of any corporate pundit saying in early March how Sanders would win Wisconsin, let alone by 13 points! I’ll say it again: they don’t know sh!t.

Are they trying to hide the fact that Clinton is in trouble? If she loses New York or it’s close, it would be devastating because it’s not supposed to happen. Sanders shouldn’t even be in striking distance in New York, the state Clinton represented in the Senate. It would be akin to her coming close to him in Vermont (which she didn’t).

But are the corporate media trying to distract the public just long enough for her to pull her a$s out of the real trouble she’s in? Or are they trying to move attention away from outcomes which have larger implications for how you’ll judge their credibility in the near future?

When these “psychic” predictions come flying fast and furious out of the mouths of corporate media pundits who really don’t know sh!t, the public had best step back and search for the hidden agenda.

The establishment media should have seen enough of this 2016 race by now to know when to shut the fck up and let people vote instead of haphazardly decreeing what will or won’t happen.