Don’t ask me if I’ll vote for Hillary Clinton in the general if she’s the nominee because I won’t give you an answer. This media-driven question is one I wholeheartedly reject because no matter how I answer, I lose as a democratic voter. 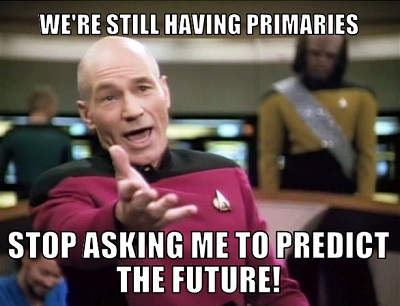 I find the framing of the question ridiculously premature especially since we’re still in the middle of a primary campaign with TWO viable candidates vying for votes from a democratic public deciding between the status quo and real change.

Based on the question, one has to discuss the political climate in a way favorable only to Clinton, which puts her in the driver’s seat of the Democratic party and attempts to keep the words/phrases “Clinton”, “vote for” and “nominee” constantly in the minds of the Democratic base.

I honestly think the question is meant to blunt support for Sanders because, hey, how many people want to be on record supporting someone they think will ultimately lose? And certainly if they have it in the back of their mind that he’ll lose, how likely are they to phonebank, organize rallies or educate their social media following about his policies?

There are only two ways to answer that question based on how it’s framed: “no, I won’t vote for her” or “yes, I will vote for her”.

If a person answers ‘no’ they won’t vote for Clinton, they are subjected to an endless amount of whiny guilt-trips from other Democrats who are apparently so scared sh!tless at the thought of Trump that they will vote for anything with a (D) behind the name. That includes voting for Clinton, someone who seemingly specializes in old-fashioned pandering and incremental (if any) changes during a period where the political earth has moved under the Establishment’s feet.

In addition, Clinton’s campaign and her supporters can attempt to turn these people into selfish whipping boys or ‘bad Democrats’ who would rather see Trump or Cruz as president. The people who didn’t pledge their support, themselves, become the problem instead of whatever failings she and her campaign have.

In short, a handful of so-called “selfish” nameless “bernie-or-bust” folk will become her excuse if she runs an inept campaign, can’t figure out how to correct her short-comings, and loses against her Republican challenger.

On the flip-side, if one answers ‘yes’ to the question, they have essentially given up ALL leverage to negotiate with her campaign and to have them seriously consider their concerns.

Let’s think about this in a serious way. If the Clinton campaign knows you will definitely come out to support her no matter what, then what fcking incentives do they have to genuinely care about your issues? Why would they care about your trite little machinations? Your immature, naive calls for unrealistic revolution and radical change?? (I’m using patronizing language on purpose) You have no leverage because you pledged your unqualified support during the primary.

Up-ending the system is not Clinton’s bailiwick. Clinton has prospered greatly in the status quo establishment environment. Thus, with unqualified support from Sanders supporters, there’s no reason for Clinton to put together policies designed to sufficiently challenge a failing system, stay more to the left than to the right, or focus on progressive changes in public policy.

Why would her campaign usher forth a comparable type of political ‘revolution’ similar to what’s being called for by Bernie Sanders? What reason would she have? She’s got your vote, remember? You’ve already confirmed repeatedly that you will vote for her no matter what she does (or doesn’t do) because you were guilted into answering that tired-ass question.

As a result, Clinton will be perfectly positioned to pretend to care just long enough to get your vote, then pay you dust in Jan 2017.

I don’t buy the notion that Bernie Sanders and Hillary Clinton are basically interchangeable. They are not the same candidate and I am not “fine with either” when asked to make a choice between the two of them. I definitely have a preference, as does many Clinton supporters on the other side… even if they won’t admit it publicly.

Clinton has already run for President once and is 1/2 of a powerful “political machine”. For Bernie Sanders to be such a formidable candidate speaks not only to his political prowess but also to an increasing subset of the public which was searching for/waiting on exactly the type of candidate Sanders is.

So don’t ask me whether I’ll support Clinton in the fall. I wholeheartedly reject everything about that lame-ass question. It will be like asking NBA Playoff Team A if they’ll support Team B in the Finals while they’re still battling it out and the score is 3 games to 3! Get the fck outta here with that mess!

We are still in the midst of a primary where the question about which candidate should be President is squarely on the table. Support your candidate and stop getting sidetracked by people trying to brainwash you into submission.